This universal stand features angle adjustments, silicone grip protection, and also an adorable interior addition to your desk. Apart from your device, you can use this stand to hold name cards, photos, and small tablets.

This phone stand was intended to be a gift for my mother and her old caseless phone used for playing games and watching videos. She liked it, but my niece liked it more, and already yoinked it from her. Fortunately, this only provided more observations I could make on the product.
The product's images are slightly raised and have a rougher texture than the green base. It's not bothersome - just something I noticed. I also noticed that the characters were printed slightly blurry? I don't know if it was the style of the pictures, or just the fact that the facial details are miniscule, but they didn't seem pristine. They weren't distorted enough to be an obvious defect - they just looked a little off. The image quality didn't seem on par with the Baby Jelly Candy phone stand (that I also purchased), but perhaps it was just my imagination. What wasn't in my head was that the grip that the phone would rest on was very slightly misaligned, but mostly in the correct spot. It didn't cause any problems, so it was okay.
One thing I found neat about the stand was that some of the angles it could be propped to were labeled. It'd be useful if there was a specific one that was preferred. The stand keeps its set position very well. My niece was using the stand to hold her phone, while she rode around on a hoverboard, and it never collapsed nor dropped the device. It's unlikely that people would roam, while using the phone stand (my niece is just a weird kiddo), but this event proves that the stand can withstand movement. It can also handle the weight of a tablet (I tested this with an iPad 2), but I think it'd only be stable while stationary - I didn't test movement alongside the tablet, since, in a real life situation, it'd make more sense to just hold it.
Continuing on with the stand's stability, it has four small grips on the underside to prevent it from sliding on a surface. It also elevates the bottom, so that it can't get scratched nor dirty.
The Green Planet Phone Stand provides what it promises, and appears to be reasonably durable. The box it comes in is cute and functional as well. Easily a fantastic purchase. 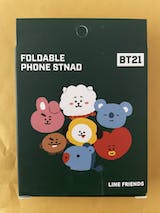 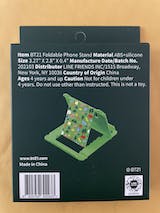 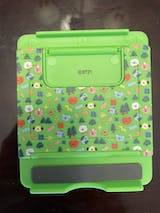 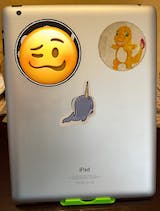 I'm very pleased with the mini phone stand I've purchased. I take the phone stand everywhere I go. It's lightweight plastic easy-to-use and easy fit into your pocket. It doesn't take much space. I'm very relieved that I don't have to always hold my cellphone when I'm watching Netflix with my friends.very cute adjustable sizes and convenient. It's compatible with iPhone and Androids . 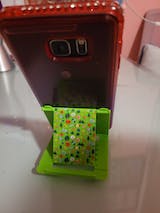 ✔️Discount code found, it will be applied at checkout.